With 20 seasons and over 200 episodes in the books, Keeping Up With the Kardashians is over. No more over-the-top verbal and physical battles between Kim and Kourtney. No more iconic pranks on Kris from Khloe and Scott. But while there will be no more new episodes of KUWTK, our love for them goes on. We follow them on social media, give them headline stories for businesses they start up, and eat up every gif, meme, and TikTok they share on the internet. We also search for them—a lot. Today, we continue to keep up with the Kardashians/Jenners through the internet, searching for each family member, trying to find the latest scoop on their lives.

GetWindstream used Google Trends data to determine the most popular Kardashian/Jenner in each state. While they each boast an impressive Instagram following (see below), it didn’t always line up with their search popularity. Let’s hope these findings will carry you over while you Kim-losing-her-diamond-earring-level ugly cry about KUWTK being over. Don’t worry—a mysterious Hulu Original is on it’s way from America’s favorite family to follow. 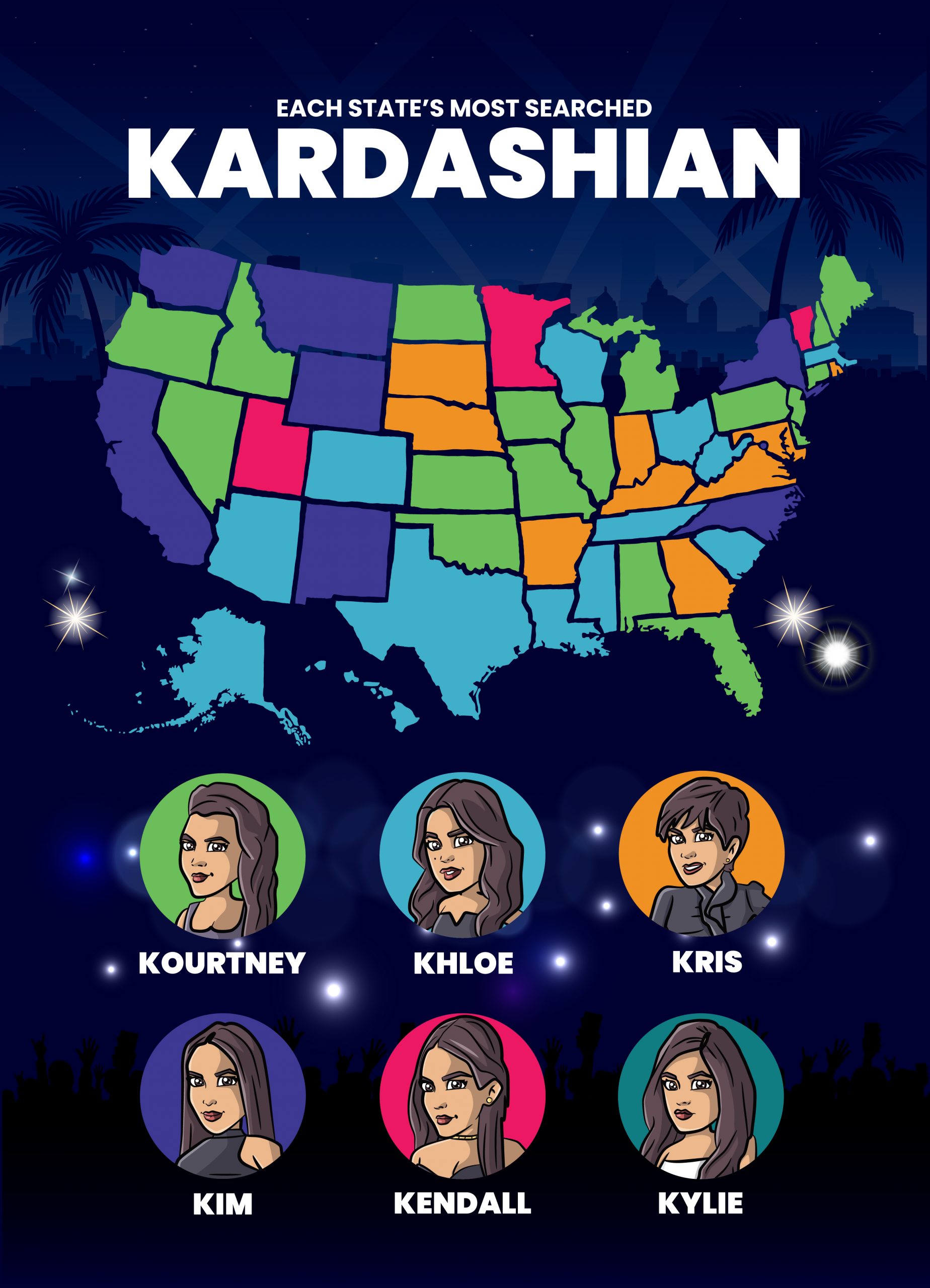 While she may be the “least exciting to look at,” according to Kim, 18 states found her the most exciting to search for—she was the top-searched Kardashian in the most states. Kim can’t complain about Kourtney not having a business of her own either, considering she started her own lifestyle and e-commerce website, Poosh, in 2019.

No one’s cheating Khloe from being the most searched Kardashian in the second most states, with 13. Khloe had a dramatic run on KUWTK, from her quick engagement—and divorce—to Lamar Odom and the never-ending rollercoaster that is her relationship with Tristan Thompson.

Kris Jenner, the head of the household and creator of the term “Momager,” was searched the most in nine different states. Rhode Islanders searched Kris the most amongst the states, potentially due to her visit to the state in 2019 for Jennifer Lawrence’s rehearsal dinner. Either way, Kris is more search-worthy than some of her children.

A few years ago, Kim Kardashian was more of a household name than any of her siblings, appearing on magazines, billboards, and everywhere in between. She was the face of KUWTK and continued to make headlines due to her success and relationships, most recently with Kanye West. Somehow, she only managed to be searched the most in eight states, one being California where the Kardashian family has long called home.

Minnesota, Utah, and Vermont were the only states that searched Kendall Jenner the most. While her looks and glam bring envy to the eyes of her beholders, her vulnerability on KUWTK made her an easy favorite, sharing her experience of anxiety during a time when mental health gained mainstream attention.

The most popular family member on social media, Kylie Jenner made it in the search bar for several states but was constantly outshined—or in this case, out-searched—by her sisters. She can still boast of her Instagram followers, becoming the youngest billionaire in the world, and the fact that she hid her pregnancy from all of us until baby Stormi was born! That’s an impressive feat when you have cameras and paparazzi following you everywhere.

Each State’s Most Popular Kardashian/Jenner

GetWindstream is an authorized seller of Windstream products.

Every State’s Most Searched GIF

Why Are People Leaving Netflix?